I’ve been sick of late and so has Eoin. This of course was for most of my holidays. I had planned to do a bunch of things and finish off some sewing projects, but that didn’t happen as I needed to clear out the craft room first and was too sick for that. But I did manage to do a bit of knitting, as I can at least do that while vege-ing out in front of a DVD or while watching Eoin play.

I have a nice book with some kids patterns in it - Essential Kids by Debbie Bliss and I managed to get the zipped gilet finished. I ended up not putting on all the pockets as I just wanted to get it finished and he’s not into pockets just yet anyway. It fits him now with room so I should get a couple of seasons out of it. It’s perfect for this spring weather where a full jacket or jumper isn’t quite warranted but something a little warmer around the chest is needed. 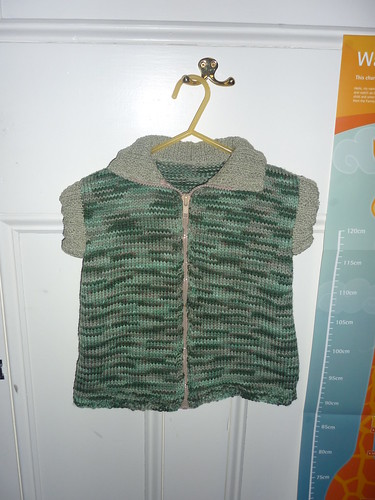 After finishing that I then decided to make the hoodie from the same book. I’m making the hoodie in a size 3/4T as he has enough for this size and won’t be wearing much in the way of winter gear until around his birthday next year.

This is the pattern I’m working on 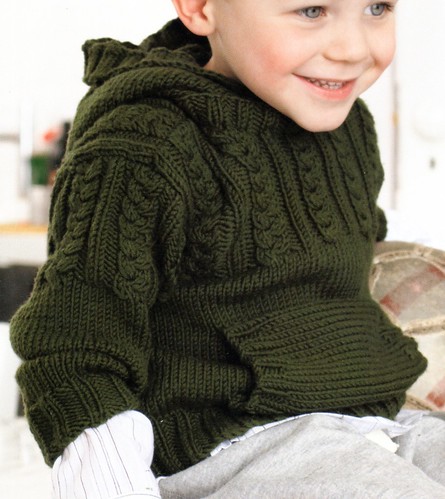 I’ve finished the front, back and both sleeves and I’m currently working on the hood. I make a mistake in one of the sleeves and didn’t realise until I was halfway through the second one, so I had to unpick most of that first sleeve and redo it. Frustrating, but at least that’s done now. I’m also glad I’ve finished all the cable work. Eoin has run off and hidden my cable needle and I’m going to have to wait until I can do a full search to find it  Oh well, it will turn up eventually. I’ve chosen a khaki green for Eoin’s jumper. Hopefully it won’t take me too long to finish and then I can post pics of it.

I'm currently working with a group of others on a quilt for Breaking Dawn.  The block i've worked on are for Esme Isle and the "why am I covered in feathers?" scene

This is Esme Isle.  The house is described as white with large windows looking onto the beach.  I was going to originally going to piece the dolphin in the water as well, but was running out of time and as i already had this dolphin fabric in my stash, i decided to use that instead.  Note that this image is an uncropped picture so once stitched into the final quilt the seam allowance is taken into account the sun will have more of a rounded image rather than the teadrop shown here. 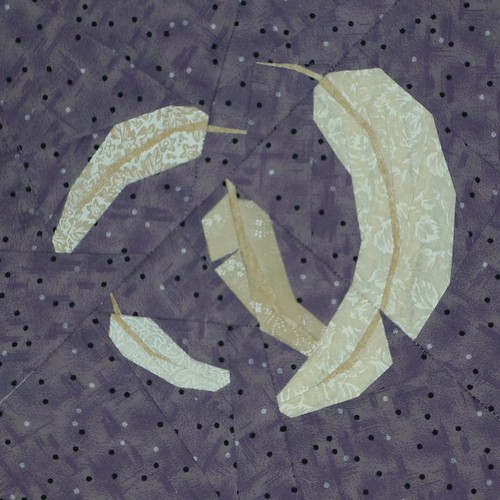 This is my covered in feathers block.  It was hard to find a background colour that would suit and still showcase the feathers well.  I also used different cream tones for the feathers so that each was distinct in itself and to give a bit of feeling of depth to the image.


I'm looking forward to seeing all the blocks the others in my group have finished and once the overall quilt is completed!

ofenjen and i have worked on getting a Quileute Wolf Pack Tattoo quilt block.  It is a pattern that i had worked on quite some time ago, but just needed some help to tidy it up so that it is usable by others.  It is part of a mini challenge over at Fandom in Stitches at the moment, so i encourage you all to go have a look.  You'll also find the pattern there if you want to give it a try.

I have a bunch of other patterns that i need to tidy up at the moment, so hopefully I'll be able to post some more patterns up soon.

Even here in Australia we've seen just a snippet of the fires in Central Texas. My good friend

ofenjenis in central texas where many people have lost everything, with some even losing their lives. If you quilt, then please give a thought to making a block for the Linus Connection in Central Texas. Click on the button below to follow the instructions.

My latest pattern is of Bob the Builder which is one of the hardhatkitten's favourite shows at the moment.

You can see the pattern HERE at Fandom in Stitches.  It's a 10" pattern and i hope to have more from the series to follow in the not too distant future as i'm working on a quilt for the little hardhatkitten

It's a bit sad that this is the last one.  I'm going to have to madly get some other blocks that i've been working on completed though before the next project on Fandom in Stitches starts up.  PoD has been great though.  Can't wait to assemble all the blocks now! 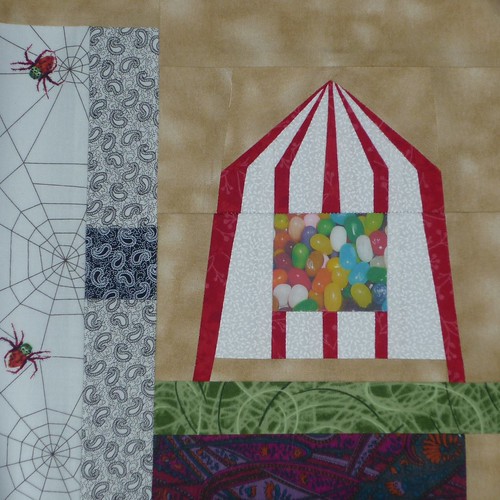 With these 2 blocks now completed i am officially up to date with my Project of Doom blocks.  Only block #30 to go.  Now all i have to do is be patient and wait for Thursday here (Wednesday in the US) to roll around so i can print out and work on the last pattern.

These were the 2 i finished today

Block 26 - i wanted to use this bat fabric for quite some time, and thought i would use a shrunken version of the fangs pattern (available on Fandom in Stitches) together for a book on this pattern

Block 28 - Trevor the toad hopped into this one.  i had fun with this one.  I had him sitting on a stony looking book print and made the effort to get the print all lined up the right way.  I don't always bother with doing that for directional fabrics but i'm glad i did for this one

Well my QAYG quilt blocks have made it to Victoria in their next step to becoming comfort quilts for flood victims.  You can see them in THIS post by Sew Many Quilts.  Finish quilts can be seen on her other blog Oz Comfort Quilts.  Mine are the group of squares above the heart blocks.  I also have some more wadding scraps come into my possession so i'm going to make a few more.

Just sent a bunch of QAYG blocks to ozcomfort quilts. they will get made into quilts for victims of the Queensland Floods and as Queensland has just been hit with a Category 5 Cyclone they'll need all they can get!

You can see the blocks that have been already donated Sew Many Quilts - Too Little Time. 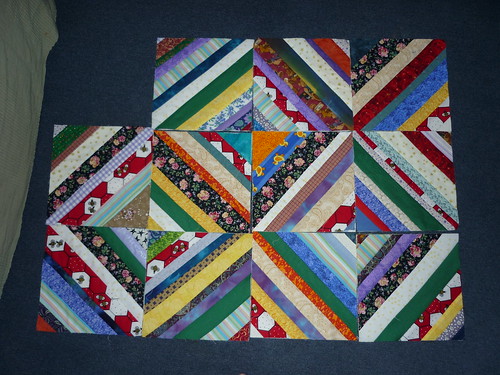 For those that don't know - i used to live in Queensland and still have family there.  Where i used to live was badly affected by the floods, so i encourage anyone who can to make a few blocks and send them through to Jan at Oz Comfort Quilts to help those in need in Queensland this year.

The tutorial for Quilt-As-You-Go (QAYG) quilts is HERE

twilight_crafts .  There are prizes to be won and a bonus new pattern

This quilt is almost finished.  i just need to finish the hand binding on it.

I did this quilt with my quilting classes while on leave.  the pattern is called "The Fabulous Fat Quarter Quilt" by PennyLane Patchwork

I machine quilted it on my little very basic Janome i've had since high school, and although i'm sure it would have come out a bit better (particularly in the middle) i have a sense of satisfaction in doing it myself.  Hopefully it won't be long and this will be on our bed (weather permitting!)

I call this quilt Under the Deep Blue Sea 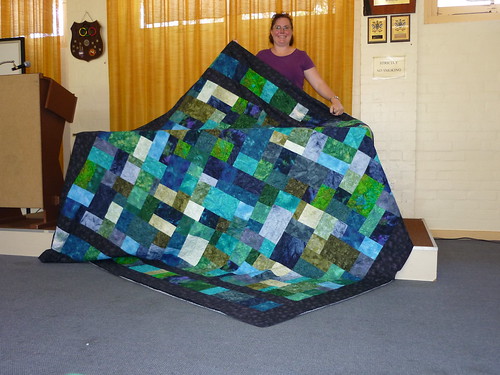