ttmt videos :( which is really frustrating.  i still haven't got to watch all of last weeks videos and it's Tuesday again already.  I've taken a whole heap of large files off my laptop and put it on my external hard drive, but it's still slow.  I'll have to do a few other things and then restart it to see if that makes a difference.

A funny thing i was tidying up the kicthen bench and saw what i thought was dirt all over the place, when i ralised that hubby had been baking with the kids and they had knocked over the cocoa powder ;P Still messy, but not as bad

haven't done much the past week, but i have sat down and done some party planning with Eoin.  Tara is sleeping through most nights now, which is great.  if only the boys would do the same.

We've been tidying up the yard ready for the party and sorting out things around the house, so not much to show for our time.  We've also been doing a lot of baking with the kids.  Nathan has been making biscuits and cakes with the boys and i made cheesecake with Eoin.  I let Eoin be a lot more hands on that Nathan does, so Eoin really enjoys it.  For the cheese cake i let Eoin crush the biscuits for the base himself.  I put them in a snap lock bag then wrapped it in a tea towel and gave him on of my rolling pins and told him the bash away!  HE loved it and he checked regularly to make sure he got the crumbs fine and even without any huge lumps.  He then added the melted butter and mixed that through.  i was going to come back and finish it off to make sure the butter was mixed evenly, but i didn't need to!  He's learning! anyway i then had him cut up the cream cheese into the mixer and he added the lemon juice.  I helped with the condensed milk.  He then turned it on and mixed it.  I have an old Kenwood mixer that my mum bought before i was born.  It can handle quite heavy duty mixing and is great for lumpy stuff like cream cheese.  The hardest thing he found was then waiting for it to set :)

I'm going to be late doing my own ttmt video as well as i haven't done much, but catching up with my mums group for a bit of a sewing day tomorrow, so might have something to show after that

The fandom in stitches mash up is open for voting now

Please go and vote on your favourite piece of quilty goodness

Mine is the Womble block if you want to know

Ok so here's my entry for the Fandom Mash Up on Fandom in Stitches. I get confused a bit with the time zones, so not sure if i got the entry in on time (they were due by the 1 March), but thought i'd share here anyway as i really enjoyed this.

I originally i had a bunch of what i felt at the time were really great ideas, but the realty of getting them done with little kiddos underfoot just meant they didn't happed.  That included using a bunch of the HP character blocks to make a Hamlet quilt.  Then again on Shakespeare i was thinking Richard III, particularly with his actual skeleton being found recently in an UK carpark.  But then again ... time.

Then i got to thinking about things and i was watching an episode of "would I lie to you" where Katherine Parkinson (IT Crowd) had said that in a school biology exam that Wombles were a type of mammal (http://youtu.be/ZtknPjgzt_I) Well it got me thinking just how much i used to love the wombles as a kid.  It's kept growing on me and i kept humming the theme music... Well i had to do something with a womble.  The my sewing machine died (well not dead completely, but tension and timing went so no sewing until i got it looked at), OK so i checked out Gumtree and picked up a decent second hand machine for a reasonable price.  OK, i'm back sewing again.  Then i get a phone call from childcare.  E has developed fever and a terrible cough during the day, and by the way there is a viral infection going around the centre.  Just great.  So nothing got done this week.  Thursday night comes around and mum tells me shes coming up to Adelaide to babysit my niece Friday night.  I organised for her to come up earlier to watch the boys so i could get something done.  Even better and E has got past the bug and was back at childcare, so mum just watched bubs for me.  So i finally got my Womble panel done :D 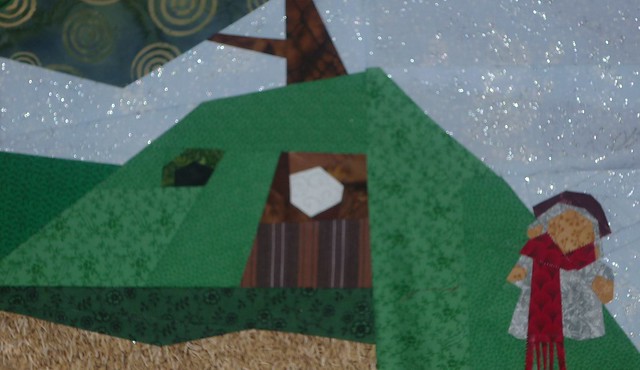 Here I used the Bag End pattern from the LoTR patterns on Fandom in Stitches to recreate one of my favourite childhood TV shows, The Wombles.

The Wombles live at Wimbledon Common in London, England and collect things left behind and reuse them for themselves. There are several Womble characters and the one shown here is called Orinoco.
ref: en.wikipedia.org/wiki/The_Wombles

The Wombles are Hobbit height and live in burrows in the ground, so the Bag End pattern was perfect. I've just tweaked it a little and added a Womble. Originally i was going to add more of the Common, but i'll probably add that at a later date.

I will also be adding the Womble pattern by itself at some point.

Here is episode one for those that haven't seen the wombles before
youtu.be/aCf_PpDUTdA

Not much of a post.  i know i keep saying i'll do a proper one, but here's my lastest block for

This is a pattern i had in a book and i modifed it slightly.  The book was "501 Quilt blocks - a treasury of patterns for patchwork & appliqué" The pattern was a traditionally pieced block so i converted it to PP as that is my preferred technique, and i changed the arrangement of the boats slightly.  I liked the fabric for the sky and water for this.  I was lucky in that my local fabric store was having a massive sale on their last season quilting fabrics, so they had a huge reduction on them and were mainly novelty prints, but i managed to find the water and sky for this in the pile! :D I tried to keep the sky all directional on the blocks and i think it works well.  I may have to make myself another block for my own stash using these fabrics 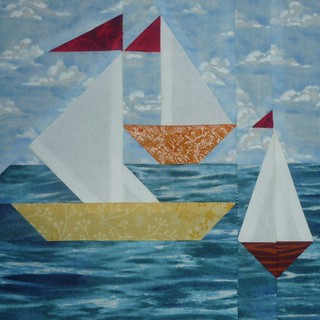 The Jungle Prints kids quilt (2012)
I only needed to stitch down on the binding for this one so there wasn't much to do, but it has been sitting there for a while now, so it was nice to get it finally done!

Background fabric is the same as the cream background print with the red hearts and brown,grey & red animals 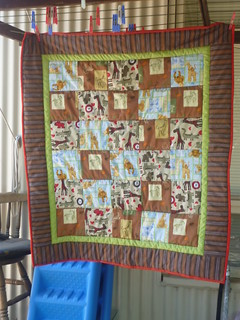 This is a once in a lifetime opportunity for any Twilight Saga fan! A handmade, Breaking Dawn (Part 1) themed quilt made by the members of the TQC. Just in time for the movie release and Christmas! To make it extra special, the quilt has 8 autographs from the saga’s actors: Peter Facinelli (Carlisle), Booboo Stewart (Seth Clearwater), Alex Meraz (Paul), Gil Birmingham (Billy Black), Tinsel Korey (Emily), Guri Weinberg (Stefan), Patrick Brennan (Liam) and Bill Tangradi (Randall). For every $5 increment donation, you get a chance to win. Give $5, get 1 chance, give $20, get 4 chances... The more you give, the more chances you have of winning!!! Donations will be accepted from October 28th 2011 until December 10th 2011. The winner will be announced on December 12th 2011. We promise not to share your personal info with any other party. Your name will be posted on our website and blog if you are the winner, but nothing more. Remember to make sure your email address is available to us through your PayPal account so we can contact you if you win. Please give generously, and who knows! You might have this gorgeous quilt in your hands!!! (Former and current members of TQC and their immediate family members are not eligible to win).

50% of your donations will go to Alex’s Lemonade Stand Foundation (ALSF) and and the other 50% will go to Childhelp. All proceeds for ALSF benefit research in childhood cancer. Proceeds for Childhelp go towards prevention and treatment of child abuse. Great causes, great prize! Thank you for your generosity, and good luck!

Please head over to our quilt site here for more details and to be apart of this.

Please help share the word and put a link http://www.twilightquilters.org/ on your craft blog!

Here is the jumper for Eoin finally finished.  I did knit the hood that goes with it, but will put that to one side for now.  i'm not sure if he'll like hoodies by that stage or not, so it's knitted and ready, just not attached as yet. 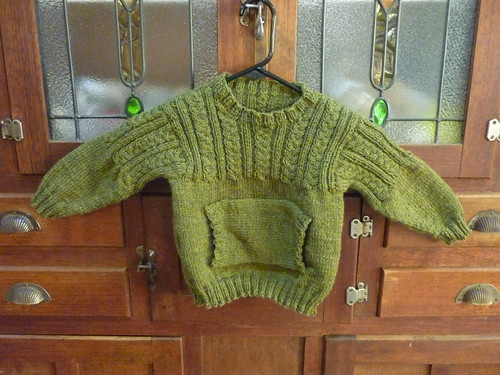 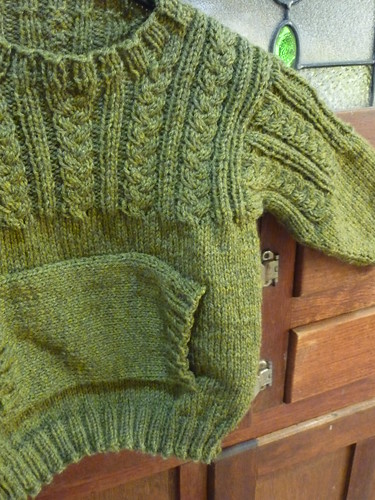 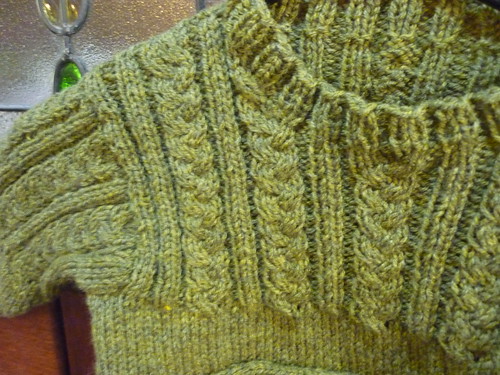 I also received a block from 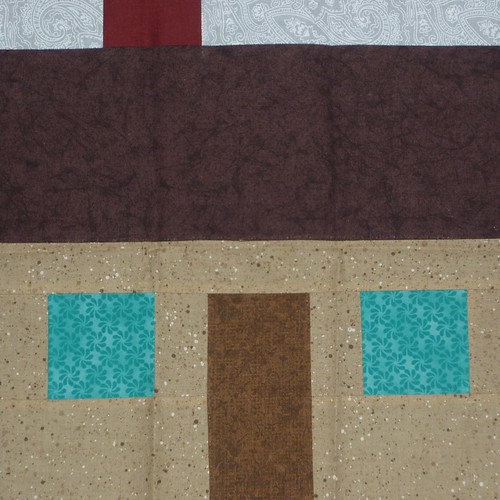 I have a load of sewing projects that need to be completed, but my sewing room is still not in what i would call a usable state, so i'm doing more portable projects such as knitting.  I'm not sure what i'll do next so i'm going to try and go through my yarn stash while Eoin is still asleep and see what inspires me.
Collapse